About all I've been "creating" lately is lists, so when I saw Aimee was starting up List-It Tuesday again I figured that, at least, was something I could do. This week's theme is resolutions for the remainder of the year, but instead I decided to take a few minutes (stolen between supervising the bedtime routine and packing my son's lunch for the following day) to write down all the things I'd like to make, when I can re-work this crazy schedule and find the time. 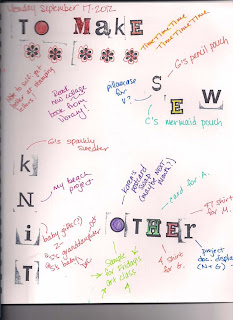 You can click on that to make it big enough to read, I'm pretty sure. I scanned it, so the far left edge is a little blurry in spots. The stamps were an impulse buy at Target yesterday, and I am so bad at stamping alphabet stamps; I have to work on getting the pressure just right so I get a nice stamp of the letter but none of the edge. My list is not as gorgeous as Aimee's, but it is written down now, so when I get those precious itty chunks of time, I don't wander around going, What did I want to do again?

Where have my creative energies been going instead? Mostly in getting ready for my co-op classes and supporting my kids' project-based learning (here and here, and I'm not up to date on posting about it all yet). I think I'd be doing a little better if we could ease into the day, but with one in school, too, that's not possible. So I'm just hanging in until things even out, which I hope they do soon. Meanwhile, I have the goal of at least once a week producing a slightly prettier list than my usual scrawled-in-the-daily-planner type of list. Although, I think those workaday lists are pretty fascinating and just might share some of those, too!
Posted by amy at 9:07 AM

Handwritten! You won my heart!! Thank you for taking the time to make such a beautiful, colorful list, and I love how your goals branch off from the stamped words. They look awesome!

A person after my own heart...I'm a list maker too. Now that I have free time on my hands, if I don't have a list, I get nothing done. I'll play on the computer or just sit, and won't pick up a project. I need to have my lists a certain way, but I love your bright, cheerful, creative list! Hope the school and homeschooling are going well!

My, what a formidable list. You put me to shame. Love the stamped letters and the hand written "tree".

hee hee - I impulsively bought those exact same letter stamps at Target yesterday too. let's hear it for colorful lists that remind us of our goals and dreams.

looks like lots to choose from. Good luck making time - if you find the recipe, please post! {:-Deb

I'm a list maker as well. And a note taker. If I don't write it down, I tend to forget about it. Sad, but true.

Each January, I buy myself a bright colorful notebook to use at work throughout the year. I've had monsters and superheros and this year bright polka dots. If I have to write things down, I can at least have some color in there.

I like your list better than my list. Call plumber. Call lawyer. Call realtor. Call contractor. Call school. Call other school. Cat to Vet. At least that wasn't a call!

@Donna Lee, I always like how you seek to brighten up what could be mundane.

@Deb: More a reminder to myself to make the time, because these sorts of activities are crucial to my well-being and they've been getting pushed aside, repeatedly.

what a gorgeous idea. I really like that. Makes lists for creative work makes so much sense to me. It helps me order my thoughts and time. And that's a lovely way to do it.

I love this creative list complete with stamps (oh, i love stamps, but I always end up stamping the edge-bit too...doesn't matter, part of the charm!). I know all about list making...my wishlist is long too... But like you said, when you've got it down you know exactly what you can be doing when you get a spare moment!

I love the idea! And your list is so pretty with the stamps. I can't though. I just can't. At the moment it feels like another thing to put on my list. I'm not even sure I want to make anything right now. Sad, huh? Except I'm in story mode in my head, so I guess technically Im making stuff- people, worlds, stuff.

I love your handwriting and your fresh colours!!

What I'm Posting About